Boragó: Coming from the South

Some of the most adventurous and groundbreaking cooking going on in the Americas for the past decade has been happening in Santiago, Chile at Rodolfo Guzmán’s restaurant Boragó. Guzmán’s wild experiments have been continually pushing the boundaries of cuisine in the region, such as his tests with fermentation and inoculating vegetables to make cheese. A cookbook was a natural next step.

Part of Phaidon’s biannual chef Monograph series, Guzmán’s book Boragó: Coming from the South is the first in depth look into the restaurant that has changed the face of Chilean cuisine. Chile’s intense landscapes – ranging from the world’s driest desert in the north to the wet, mountainous terrain of Patagonia in the south – are featured and photographed prominently. An entire chapter is dedicated to Guzmán’s outlandish experiments, such as the time he hung mushrooms at an altitude of 11,500 feet for the winter and cut them like ham. Additionally, there is a selection of 100 savory and sweet recipes from the menu at Boragó, as well as a pair of forewords from Mugaritz chef Andoni Luis Aduriz and Gelinaz! Founder Andrea Petrini, both strong supporters of Guzmán.

Guzmán was kind enough to answer a few questions about the making of the book:

New Worlder: What was it like making this book?

Rodolfo Guzmán: This book talks about what we are, what we have around, and where we come from. It’s about learning our process and all of our stories behind the restaurant. Starting at something I like to call Point Zero, where we were starting to cook for the first time. From the beginning when we really didn’t know anything about the country until finally we learned it. We learned it from everything and from everybody and that’s the starting point, which we say started in 2016. I wanted to make sure that this book was going to be a very different book as it’s explaining how the restaurant works and how we think about food. It talks about that Point Zero, you know. There’s a lot of writing and a lot of stories about how the restaurant started. All of the bad things we got through all the good things we are going to do. Everything is related to the team, of course, and how we understand the terroir itself, the whole country, and the people in it.

Chile was not a food destination until recently. Most people didn’t know much about what we were doing until a few years ago. It’s still quite a new restaurant for many people and I feel this book can reach a bigger audience and I’m excited about that. We try to show Chilean ingredients and the human side of them that we have been able to discover through our way of thinking about food.

NW: Chile’s dramatic landscape, which extends for more than 4,000 kilometers from one end to the other, has been a driving factor in your cooking. How is landscape portrayed in the book?

RG: We have to be honest. More than anything else we’re trying to be Chileans. We are not preserving our food culture. We are doing a bad job trying to be the continuation of the Mapuche. They have been around for 13,000 years in the Americas, so it’s an ancient culture, and at least 80 percent of us have Mapuche blood. From that point of view, we have to be focused on those small windows that open throughout the year. Even for a week, a few weeks, a few months, whatever. We have to learn from the entire landscape: from the Atacama Desert to Patagonia.

It’s not going to be a normal cookbook as you can probably tell. I’m a fanatic of architecture and in love with how architects describe their projects, a way that cooks usually don’t. This is a book goes deeply inside of an idea and we wanted to be real and we wanted to show people how our ideas are evolving through time. You might find three versions of the same dish with three absolutely different results and three different recipes. The recipes are organized through the landscape and by the seasons. 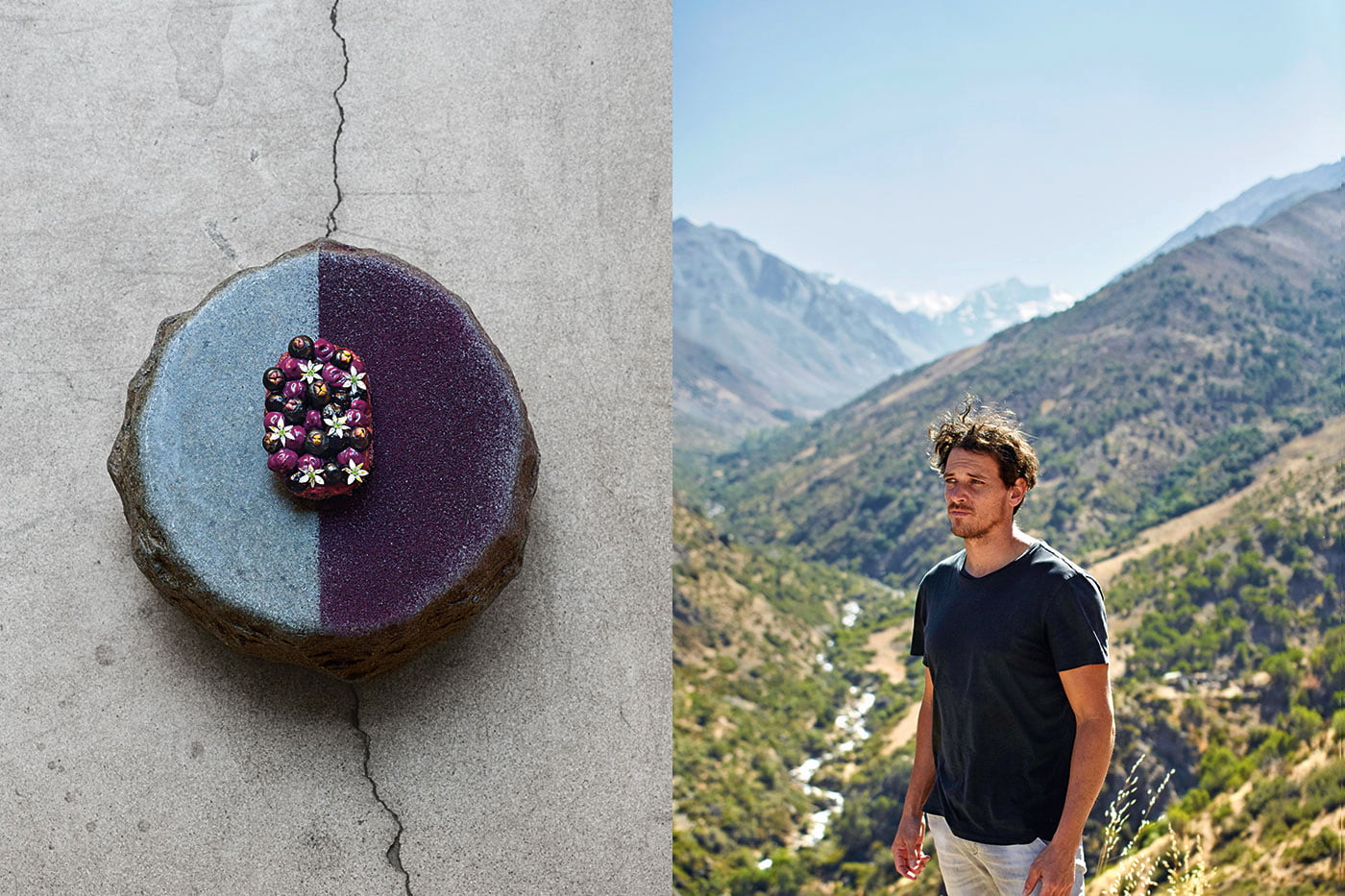 NW: Even for those that have been following your food for years, there are a lot of elements to your cuisine in the book that are quite new, such as working with garums. Tell me about that.

RG: The book is been organized in a very different way: through geographies, elaborations, and recipes. Elaborations are ways of prepping food that are not necessarily our way of doing things in Chile. Through studying other cultures we have been able to rethink the different ways of making our food with creativity. Making something they do in Japan in a completely different way in Chile. In a way if you attach this knowledge to tradition it can evolve tradition. It can become something new, something more attractive to the present generation.

We’re not so into garums or kombuchas really, but more about flavors. Can you imagine being a painter and being able to work really well with 25 colors and being happy, but from one day having someone show you 300 colors? It’s a revolution in your mind. You evolve. You can rethink what you have done and what you can do with it. That’s the Point Zero in our minds. It’s reopening the doors of the restaurant like for the first time. It’s the starting point of our cooking. And while we are using garums, it’s not really in a conventional way. We like to make something we call 100 percent garum and it’s expanding our way of cooking with flavors. We’re focused on doing 100 percent mushroom garums, or garums made with 100 percent wild fruits or seaweeds. We have noticed that the decomposition of mushrooms is quite similar to or generates something similar to a garum made with fish guts.

Essentially, we’re focused on looking for new flavors, to expand our way of cooking. When you are focus on that you have to become a student. Not only a student of your country, but of everyone and every culture in order to evolve. We can say we are as focused on fermentation as we are on super, super seasonal ingredients such as some vegetables that we wait for a whole year to have for just a three-week flash or as we are on fire, on mastering the power of the embers, the flame, the rescoldo. I don’t think one is more important to the other, but it’s related to our curiosity and I hope to convey that to the reader.

NW: There is a considerable amount of exploration of using mushrooms and fungi in many of the recipes? Why are mushrooms so important  for the kitchen at Boragó, and Chile in general?

RG: We have so much native forest in Chile, which happen to be near to the mountains, the Andes and the sea at the same time. It’s a very particular environment and weather situation, with unique ecosystems that are unlike anywhere else. A lot of people think that Chile is like the rest of Latin America, but it has an absolutely different seasonality and characteristics. That makes it quite different. Many of the mushrooms in our forests are very unique in the world and sometimes appearing only for a few weeks a year. Like the dihueñes, the Chilean morels, the pan de indio, the loyos. It was part of the Mapuche diet and we want to get deeper into that and help people learn about that, but also about their beautiful flavors.

Also, mushrooms have enormous potential, not only in gastronomy, but in general. I think Chileans don’t have enough appreciation for our mushrooms. There are huge possibilities surrounding the foraging of mushrooms and just studying them, the ways of cooking them, and just feeding people with them. In terms of cooking they couldn’t be more delicious. For me, they are as important as vegetables, as a fish or seafood, or meat. It’s one of our primary objectives and I’m fortunate I’m able to work with such unique mushrooms.

NW: While this book is not the first (especially from Phaidon) where many of the ingredients – plants from the Atacama Desert, unusual sea creatures like piure, etc ­– are inaccessible to most readers, not to mention to many in Chile, why is it important that these recipes are still shared?

RG:  It’s a beautiful question and I thank you for asking it. You’ll get to see these unique ingredients in the book and the reader will not be able to have them in your hands, but it will give you a feeling of what Chile is about. It will give you a feeling of what has been our deep exploration through our years of practice. Cooking is a very human way of understanding what you have around and where you come from. You might not be able to see an ingredient in your hands, but it can help you understand what we do in Chile. For Chileans, it’s very special because they have preferred imported ingredients while ours have long been undervalued. Nature didn’t put the prices on our table. We did. Chilean native ingredients can be as exciting as an ingredient anywhere else in the world.

You can order Boragó: Coming from the South through this link.

Writer and photographer Nicholas Gill is one of the co-founders of New Worlder. He lives in Lima, Peru and Brooklyn, New York. He is co-author of the books Central, Latin America: The Cookbook, and Slippurinn. His work also appears in the New York Times, Fool, Saveur, and many other publications.
All Posts »